Just 30 minutes from the sea, the country of Bray offers a rich mosaic of landscapes mingling escapes in groves and gourmet discoveries tasty. This small agricultural paradise, straddling the regions of Normandy and Picardy, seduces both for its authenticity and its singularity. Oyé, oy! Lover of bucolic landscapes and the sweetness of life of the Normandy countryside, the country of Bray is waiting for you ...

Nicknamed "the buttonhole", the country of Bray is a hilly landscape "in bowl" which extends between Dieppe and Beauvais. Result of an erosion phenomenon that has left surfaces of various natures (clay flint, sandstone, chalk ...), the country of Bray offers a building with characteristics from the geology of its rich and varied territory: Traditional houses of mud or orange-fired bricks, ferruginous sandstone mansions or lime-washed whitewashed dovecotes melt into lush green valleys and fairy gardens.

Here, the cultivated lands stand alongside the enchanting and dense panoramas of meadows, groves and forests, which offer many possibilities for walks. The forest of Eawy, one of the largest beech forests in France, is punctuated with marked trails to discover all the charm of its unsuspected natural treasures such as the Wonderful Well, a chasm of 25 meters that feeds funny local legends.

In the buttonhole, three main towns concentrate human activity: Neufchâtel-en- Bray, Forges-les-Eaux and Gournay-en-Bray. Each has developed an industry whose products make the national reputation of the country of Bray. Neufchâtel-en-Bray markets and exports its cheeses, Forges-les-Eaux attracts for its casino and the Green Avenue that connects Paris to London and Gournay-en-Bray perpetuates the manufacture of the legendary "petit-suisse".

Like Normandy, the country of Bray has a particularly tasty soil due to a very present agricultural activity. Colorful, lively and picturesque, the Brayons markets are real institutions. On the stalls are the best products: the Neufchâtel, millennia AOC heart-shaped cheese and delicately salted, milk, poultry with the rustic hen of Gournay, honey, cabbage Saint-Saëns massive or the pommel of Normandy and Calvados labeled.

Land of cultures, land of greedy, leisure and well-being, the country of Bray has serious assets ...

THE COUNTRY OF BRAY 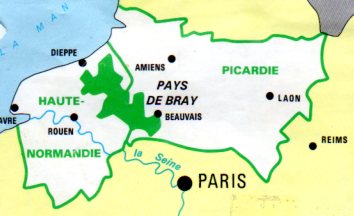 Grand period house for sale in Clères, North of Rouen